Admiral Flogmore is the presumed to be head Stromling Admiral Invader on Crux Prime. He can most commonly be found in Aura Mar and has been seen in Sentinel Point Zeta. It is often mistaken that he is the only enemy that drops "Flogmore's Hat". This is not true, as dragons can drop it, but it is easier to get from Admiral Flogmore.

Admiral Flogmore can be easily mistaken for a common Admiral Invader. However, his major give-away (apart from the brighter glow) is his hat which is a deep purple as opposed to the normal Admiral Invader's Black Cap (ironic since "Flogmore's Cap" is black). However there is not much difference between the colors, and this should not be used as the only way to identify him from other Admirals. His eyes also glow red, instead of the normal yellow, and when he walks he leaves a small trail of red shapes in his wake. 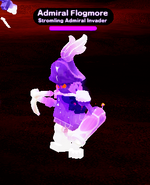 Fighting Flogmore
Add a photo to this gallery

Retrieved from "https://legouniverse.fandom.com/wiki/Admiral_Flogmore?oldid=158458"
Community content is available under CC-BY-SA unless otherwise noted.