The Alpha Test was a testing phase of LEGO Universe that was limited to select people and groups.

Before the LEGO Kids Inner Circle was invited to test on December 8, 2009, the only people who could play the game besides kid playtesters were LEGO employees and their friends and family, and LUPs.

The first outside users to receive invites to the LEGO Universe alpha test phase were members of the LEGO Kids Inner Circle. Invites were sent out and the game was opened for play on December 8, 2009. Only those who joined before December 7, 2009 received invites.

Visitors to CES 2010 were able to play a live demo, which ran on the same servers as the alpha. Beta Test signups were also available.

Shortly after the end of the alpha test phase, a patch was released to alpha testers, which indicated the game would be re-opened and beta testing would begin on February 25, 2010. This was delayed a week, and beta testing began on March 4, though at this point only alpha testers were given access. The first new players were accepted on March 10. 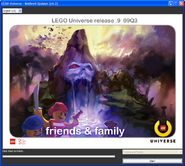 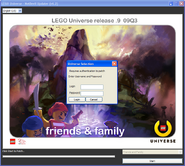 Alpha patcher
Add a photo to this gallery
Retrieved from "https://legouniverse.fandom.com/wiki/Alpha_Test_Phase?oldid=159217"
Community content is available under CC-BY-SA unless otherwise noted.