'"Smash, smash and then smash some more! And don't forget to heal!"- Melodie Foxtrot

Survival is a minigame in Avant Gardens where players fight endless waves of Stromlings, Mechs, and Spiderlings until they are smashed. It is possible to form a team of up to four people to play in this game.

This game is notable for being one of the requirements to earn a Sentinels Badge. It is unlocked by speaking to Beck Strongheart outside the booth that serves as an entrance to the minigame. After completing the mission given by Beck, the game can be accessed at any time (assuming the player has Green Imaginite Crystals).

At the beginning of the game, players will be faced with a force of regular Stromlings, which, depending on the amount of people in the team, may spawn in large or small amounts. Around 30 seconds in, Stromling Mechs begin spawning. They have 4 health, just as their counterparts in the real Avant Gardens but the longer you survive their health will keep on getting higher and higher. Unlike them, however, these Mechs' shots will home in on players. At around 2 minutes, Dark Spiderlings begin spawning. Their health remains identical to the Dark Spiderlings in Avant Gardens, as do their attacks. The only notable change is that of their increased agility; a Dark Spiderling in survival can move faster than the player. Around the six minute mark, Chainsaw Stromlings begin to appear. They have 4 health and spawn rapidly, and they also deal 3 damage per hit. Their attacks will harm a jumping player. Around 12 minutes, Hammer Stromlings will begin to spawn. They move extremely quickly in survival and spawn very rapidly. They cause 5 damage per hit and have 10 health.

All enemies will continue to spawn until the player is smashed.

Before the Power of The Nexus Force update, Dirk Manleigh would send you to Melodie Foxtrot who was then located by the Survival tower. She would then challenge you to survive for one minute. After which, you earn the Sentinel Badge allowing you to "be approved" for the Sentinel Faction. 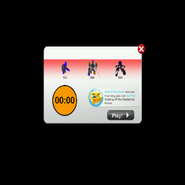 An old graphic of how to play
Add a photo to this gallery
Retrieved from "https://legouniverse.fandom.com/wiki/Avant_Gardens_Survival?oldid=157899"
Community content is available under CC-BY-SA unless otherwise noted.