Barry Smoothmoves is a Model Vendor in the Assembly Storeroom of Nexus Tower. His inventory primarily consists of Construction Models.

Barry Smoothmoves originated as the Disco Dude from Series 2 Minifigures.

According to his Bio on the Minifigures website, Barry Smoothmoves is obsessed with everything about the 1970s, including disco dancing, bell-bottom pants, and Classic Space. Whenever he hears disco music, he cannot stop dancing and causes other people to dance with him. Barry Smoothmoves has maximum creativity and is very fast, but he has only average strength. He is one of two playable characters in the Disco Dance Challenge online game, costarring with Gwen Tweenbangle. Barry Smoothmoves also makes a cameo appearance as a civilian in Invasion from Planet X2½, in which he must be protected by the A.D.U. or abducted by the Aliens. 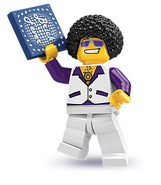 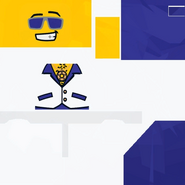 Barry Smoothmove's texture
Add a photo to this gallery
Retrieved from "https://legouniverse.fandom.com/wiki/Barry_Smoothmoves?oldid=112429"
Community content is available under CC-BY-SA unless otherwise noted.