Battle Against Frakjaw! is a minigame in Ninjago Monastery in the Cave of Black Echoes. It takes place at the Fire Shrine, and players must defeat Frakjaw in order to claim the Sword of Fire. Up to four players can play within a single instance.

Frakjaw is fought similarly to the Spider Queen, as he fights one-on one with players while releasing minions to fight with him and has multiple stages of his battle. Unlike the Spider Queen, however, most of the fighting is done by Skulkins as opposed to Frakjaw himself. Like the Spider Queen and Maelstrom Dragons, Frakjaw has a health bar which appears on the player's UI rather than above his head.

Players enter the Battle Against Frakjaw! via a Fortress Dragon Statue located in the Cave of Black Echoes. The Fire Shrine is set atop a rock face and cannot be reached by players. Worse still, Frakjaw is waiting near the shrine, guarding the Golden Sword of Fire.

When players arrive at the Fire Shrine, Frakjaw summons a wave of Skulkins, usually consisting of Skeleton Raiders, Skeleton Mad Scientists, Skeleton Blacksmiths, and Skeleton Troopers. When these enemies are defeated, a Quick Build for a Skull-a-Ton appears, which can be built right above Frakjaw's head. It falls and lands on Frakjaw, depleting a third of his armor meter.

Frakjaw summons another wave of enemies, this time also including Bone Wolves and Skeleton Commandos. Defeating these enemies drops another Skull-a-Ton Quick Build, which depletes another third of Frakjaw's armor. Frakjaw tries again to defeats players by summoning a third wave, ultimately ending with a third and final Quick Build. This Skull-a-Ton fully depletes the remainder of Frakjaw's armor.

Frakjaw climbs down from his perch and fights players himself, summoning another wave to assist him. Like Chopov, Krazi, and Bonezai, Frakjaw's Maelstrom Spinjitzu causes deadly Maelstrom Poisoning, but encompasses a much wider radius than his predecessors. When his minions are defeated, Frakjaw summons another wave of enemies to take their place.

Eventually, Frakjaw is smashed. He only drops mission-related items, such as his jawbone, and a final Quick Build that assembles a Fire Lantern, allowing players to access the Fire Shrine, collect the Sword of Fire, and open a Treasure Chest full of loot.

Players can leave the Battle Against Frakjaw! at any time using a Fire Lantern and interacting with the Fortress Dragon Statue.

Frakjaw, upon being smashed, leaves behind a treasure chest containing a variety of loot including tokens, Maelstrom Infected Bricks, consumables and a number of other common to rare Ninjago items.

Frakjaw being hit by an object

Frakjaw,as he teleports to the ground

The Starting Platform within the Fire Shrine 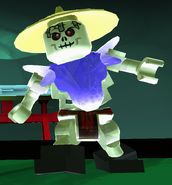 Frakjaw stands atop the platform as his army does battle.

Add a photo to this gallery
Retrieved from "https://legouniverse.fandom.com/wiki/Battle_Against_Frakjaw!?oldid=131459"
Community content is available under CC-BY-SA unless otherwise noted.