Commander Beck Strongheart is a Sentinel Faction Commander NPC and the leader of the Sentinel Encampment in Avant Gardens.

Beck Strongheart was contacted by Sky Lane when the Venture Explorer fell under attack by the Maelstrom. Unfortunately, as he had his hands full containing the Stromling outbreak from the Paradox Research Facility explosion, Beck was unable to send help. He did send advice, telling Sky Lane to send the escaping Minifigures to Avant Gardens via Rockets without telling them of the Maelstrom outbreak to avoid mass panic. Beck also sent Epsilon Starcracker to scout the area and help the escaping Minifigs.

After properly equipping them for battle, Epsilon Starcracker sends players to report to Commander Beck Strongheart and learn about the Sentinels. Beck orders players to show respect by saluting the commander. Next, he teaches players about Armor Polish, which must be purchased from Klaus Zett, and rewards them with their first piece of Armor, a Sentinel Helmet. Then, he sends players to rebuild five Stromling Mechs into Turrets.

Beck Strongheart proceeds to further educate players on the Action Bar. He sends players to purchase a Sentinel Shield from Klaus Zett, then teaches them how to use it. To put them to the test, Beck challenges players with the mission of lasting at least one minute in the Avant Gardens Survival. Impressed with players' success, Beck Strongheart gives players a Sentinel Badge and Sentinel Faction's approval for entry into the Nexus Force, then sends them back to show the Sentinel Badge to Epsilon Starcracker.

Beck Strongheart learns from players that the Maelstrom Spider Queen traveled to Block Yard and created a Maelstrom cloud over the Launch Area. He sends players on a quest to defeat the Spider Queen, informing Theo Balfour that players have permission to travel to the Monument.

When players free Block Yard from the Maelstrom, Beck Strongheart sends them a letter congratulating them on clearing the property and assuring them that whatever they build will help keep the Maelstrom away.

After players join a Nexus Force Faction, Beck Strongheart teaches players about the use of Green Imaginite Crystals, telling them that these crystals are required to play mini-games. He also explains that Imaginite is highly concentrated Imagination infused into bricks. He orders players to buy ten crystals from Klaus Zett and covers this with a reward of 250 coins. Then, to earn more backpack space, players must survive three minutes in Avant Gardens Survival Instance. After this, Beck gives Daily Missions to survive three minutes in the Survival Instance.

Duke Exeter sends players to seek Beck Strongheart for a piece of a Property Safe, claiming that the Sentinel Faction Commander knows more about security than most Minifigures. Beck Strongheart hands over a secure housing unit and recommends that players talk to Doctor Overbuild when they have all three pieces of the safe.

Beck Strongheart has a pet Doberman, but is disappointed because he thinks that his Doberman's brown coat is boring. As a result, he started a contest to Recolor a Pet to inspire his Doberman into redesigning his fur into a multicolored dream coat and unleashing his inner poodle.[1]

In early beta testing, Beck Strongheart's last name was not displayed, and his title was simply Sentinel Commander. Beck's coded message to Sky Lane was extended in early beta testing, including his recommendation of deliberately keeping the players from knowing about the Maelstrom outbreak.

For further practice with the Action Bar, Beck Strongheart told players to use a Sentinel Healing Kit via Slot 5 of the Action Bar. The mission was altered and given to Wisp Lee in the Power of the Nexus Force update. It was originally Melodie Foxtrot's role to challenge players with a minute of Survival to earn the Sentinel Badge and later give the Pay to Play mission. After players joined Nexus Force, Beck Strongheart rewarded players with more backpack space for building all four Satellite Beacons to call down four airstrikes against the Stromlings. 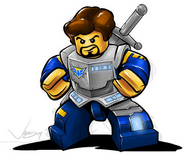 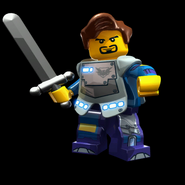 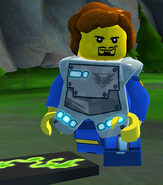 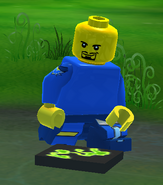 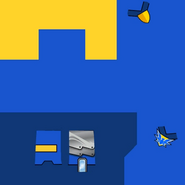 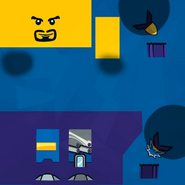 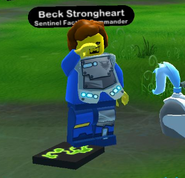 Beck saluting
Add a photo to this gallery
Retrieved from "https://legouniverse.fandom.com/wiki/Beck_Strongheart?oldid=157746"
Community content is available under CC-BY-SA unless otherwise noted.