Bill Shido is a Ninja Messenger located in Forbidden Valley.

Bill Shido can be found in the Forbidden Passage en route to the Paradox Refinery to deliver a scroll to Vapor Overcast. However, he took off his Ninja Hood due to the hood-hair it gave him and ended up losing it. Lamenting his inability to pass the Fallen Gate's Maelstrom Force Field, Bill Shido asks players to deliver the scroll for him.

Later, players can return to Bill Shido, who is finding it difficult to travel Forbidden Valley with so many Dark Ronin statues populating the area. He makes a bet with players to smash twenty of the ronin statues before their Dark Ronin awake. When players win the bet, Bill Shido admits that he now fears players for their speed and strength.

In beta testing, Bill Shido's mission to smash twenty ronin statues could be optionally repeated by players to earn extra Coins, serving as a precursor to Daily Missions. 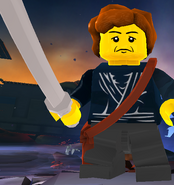 Bill Shido in-game
Add a photo to this gallery
Retrieved from "https://legouniverse.fandom.com/wiki/Bill_Shido?oldid=154227"
Community content is available under CC-BY-SA unless otherwise noted.