Bjorn Fjord is a Concert Dwarf NPC found at the Red Blocks Amphitheater.

Bjorn loves heavy metal, especially symphonic Viking Grindcore, but was disappointed by the lack of metal music played at Red Blocks. Therefore, he sends players on a mission to build and play the electric guitar instrument. As a reward, Bjorn teaches players a new dance move, claiming that the metal gods were pleased by the performance.

Bjorn Fjord was originally located in Avant Gardens, but was relocated to Nimbus Station along with Red Blocks when Avant Gardens was redesigned. Despite being moved to a different world, his role in the game remained the same.

Until mid-beta testing, Bjorn Fjord was unnamed and simply known as the "Concert Dwarf". His dialogue during early beta testing suggested that most Dwarfs love heavy metal; although Dwarfs were planned to populate Spikes Peak, there are no references to other Dwarfs in the released game.

Following the Nexus Jawbox update, Bjorn Fjord's tan pants were changed to white. Though there is no apparent reason, several other NPCs also suffered a similar change.

Bjorn Fjord prior to the Nexus Jawbox update 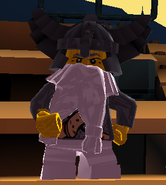 Bjorn Fjord spawned in Nexus Tower
Add a photo to this gallery
Retrieved from "https://legouniverse.fandom.com/wiki/Bjorn_Fjord?oldid=154294"
Community content is available under CC-BY-SA unless otherwise noted.