Black-Hearted Kevin can be found standing next to a cannon in front of the Black Seas Barracuda. To complete Captain Jack Knife's mission to beat a score of 25,000 in Cannon Cove Shooting Gallery, players must first talk to Black-Hearted Kevin to unlock the minigame. Kevin only lets players play the game after they bring him five cannonballs from the bellies of sharks. He later reveals that he knows a secret and will only share it after receiving ten more cannonballs from players. Black-Hearted Kevin tells players that launching a Rocket to Gnarled Forest while wearing a pirate hat will bring them directly to the Pirate Camp.

In the alpha and early beta testing, Black-Hearted Kevin was an unnamed Pirate Cannoneer who used the same design as the original Toby Squidbarrel model. In the mid-beta testing, Black-Hearted Kevin replaced this unnamed Pirate Cannoneer but had a completely different design, possessing a grey beard and wearing a sand-green fedora, a Union Shirt, and sand-green pants. 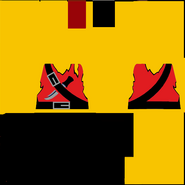 The Pirate Cannoneer's body texture
Add a photo to this gallery
Retrieved from "https://legouniverse.fandom.com/wiki/Black-Hearted_Kevin?oldid=154658"
Community content is available under CC-BY-SA unless otherwise noted.