Blackmarrow is a named Skeleton Engineer enemy who was planned to be located on Crux Prime. However, before the release of the world, Blackmarrow and another named enemy, Hardhead, were removed. Blackmarrow is still present in the game's coding, though, and can be spawned by Mythrans. 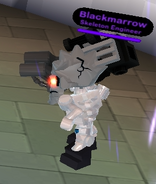 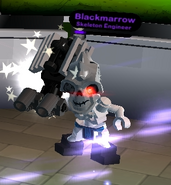 Blackmarrow spawned in Nimbus Plaza
Add a photo to this gallery
Retrieved from "https://legouniverse.fandom.com/wiki/Blackmarrow?oldid=158197"
Community content is available under CC-BY-SA unless otherwise noted.