Bone Wolves are enemies in the Ninjago Monastery. They are found in the Ninjago Caverns and in the Frakjaw Battle Instance. They have around 90 health. They attack by slashing at Minifigures (a slow attack that does 5 damage), howling, which stuns players for a short period, and leaping into the air and slamming down, creating a shockwave that does 7 damage and knocks players down. In Frakjaw Battle, Bone Wolves can "teleport" players inward with their shock wave attacks, which they use much more often. Bone Wolves are the only featured enemies in a LEGO Club Magazine that were made into the Ninjago Monastery. Bone Beetles, Bone Vultures, and the Underhand were going to be made into the Ninjago Fire Temple, but now are never going to be made into the Fire Temple, because of the closing of LEGO Universe.

When the Bone Wolf slinks close, it’s getting ready to pounce! Jump out of the way and then counterattack with a few melee strikes! Ninjas that think ahead will charge up Earth Spinjitzu and wait for the beast to pounce. It’ll get stunned when it hits your whirling tornado of dust and dirt, then release a Spinjitzu attack and make that Wolf howl!

Concept art by Kyle Wheeler for a Maelstrom-armored Bone Wolf

Concept art by Kyle Wheeler for a Maelstrom-armored Bone Wolf

A Bone Wolf in the Cave of Ancient Ways 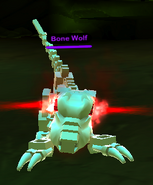 A Bone Wolf ready to howl

Bone Wolf LXF Render
Add a photo to this gallery
Retrieved from "https://legouniverse.fandom.com/wiki/Bone_Wolf?oldid=154491"
Community content is available under CC-BY-SA unless otherwise noted.