Boris Toobsox is a Foot Race Host in Forbidden Valley.

Boris Toobsox hangs out near the Paradox Refinery, offering players the chance to try his Foot Race. If players accept his challenge, his Foot Race takes players through the Forbidden Passage and leads all the way back to the Great Tree.

Prior to the Nexus Jawbox update, Boris Toobsox wore a purple Rumpled Jacket. Since many other NPC clothes were turned white with this update, this is likely a glitch, but it was never corrected before LEGO Universe was announced to close. 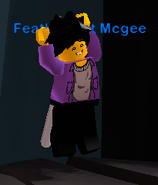 Boris Toobsox looking at the Paradox Refinery in beta

Boris Toobsox before the Nexus Jawbox update
Add a photo to this gallery
Retrieved from "https://legouniverse.fandom.com/wiki/Boris_Toobsox?oldid=131372"
Community content is available under CC-BY-SA unless otherwise noted.