When players report in with Brannan Landers, he explains that they recently lost contact with a Nexus Talon Dropship that crash-landed in Aura Mar. He sends players to search the battlefield and find Sherland Powers, the dropship's pilot.

At one point, Brannan Landers was attacked by a group of Skulkins. However, Neido arrived and, using his Imagination Spinjitzu, rescued Landers from the skeletons. Curious to know more about the mysterious Ninja, Brannan Landers assigns players with the task of traveling to the Ninjago Monastery Ruins and meeting Neido.

Prior to the Ninjago: Masters of Spinjitzu update, Brannan Landers was rescued from the Skulkins by Sensei Wu, and the mission he offered was titled The Mysterious Master. Brannan Landers also asked players to get Imagination Tea from Sensei Wu. 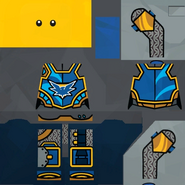 Brannan Lander's texture
Add a photo to this gallery
Retrieved from "https://legouniverse.fandom.com/wiki/Brannan_Landers?oldid=140030"
Community content is available under CC-BY-SA unless otherwise noted.