Brick Mesa was a pocket in Wonderland. It had similarities to, and was to an extent a predecessor of, Crux Prime.

In an early storyline of LEGO Universe, one of the initial explorers of Planet Crux, Prospero, somehow sacrificed himself to protect Wonderland from the Maelstrom, merging with the landscape in the process.[1] A Maelstrom rift formed nearby, held at bay by weaponry powered by Nimbus Coils in Prospero's hands and head. 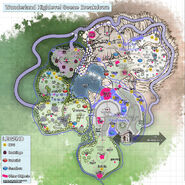 A Wonderland map from November 10th, 2007 at latest

A later map of Wonderland 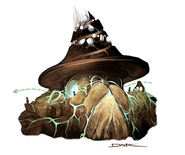 Concept art of the Power Center/Blacktron base

Concept art that may have been for Brick Mesa, by Dave Kang

Community content is available under CC-BY-SA unless otherwise noted.
Advertisement