Burno was a red dragon NPC from the pre-alpha phase of LEGO Universe.

Despite his frightening appearance, Burno was depicted as a friendly but clumsy dragon who kept accidentally smashing his hot dog cart with his own tail. He was going to be an NPC in Nimbus Park and later on Avant Gardens, giving a quest to rebuild his hot dog cart. A spicy hot dog known as a Burno Dog could be given to the Fireman to satisfy his hunger and learn a new dance move.

Burno was removed from LEGO Universe prior to alpha testing and does not appear in the released game. 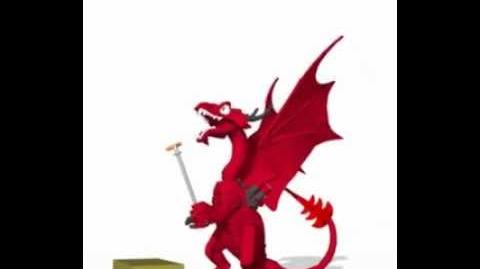 YouReeka map detailing where Burno would have appeared

An exclusive brick given out at Zwolle 2009

Giant Burno in Nexus Tower
Add a photo to this gallery
Retrieved from "https://legouniverse.fandom.com/wiki/Burno?oldid=158101"
Community content is available under CC-BY-SA unless otherwise noted.