The Chaos Cleaner Machine is a device at the Paradox Refinery in Forbidden Valley. It was invented by Echs Ray to aid him in his studies against the Maelstrom. It provieds a crucial role in several missions for Echs, as well as getting the Forbidden Valley Imagination Brick.

The cleaner also runs a machine which analizes a Maelstrom Fish in a tube. When both of the two consoles are built and activated, the tube dissolves and the imagination brick is released.

The machine must be used in Secret of the Skeletons, to study Nuckal's Maelstrom Crystal. In Chaos Cleaner, it is used to purify a Maelstrom Dagger for Nya.

The console is not a permanent object, and must be quickbuilt before use. To do this, players must smash a pile of pipes which is resting beside Vapor Overcast, and rebuild it into another pile near Echs Ray, which then rebuilds into the chaos cleaner.

To complete Echs ray's missions, this machine will work fine, however to obtain the Imagination Brick, players must seek out another pile of pipes, which is sitting on a rock by Brick Fury. Players must then rebuild it into a pile of pipes which lands closer to Brick Fury, then again to a pile on a ledge near the refinery, where they must shoot it down with a gun.

It must then be rebuilt again to a pile near Echs Ray, and finally into the chaos machine, where it can be activated. There was a glitch before Crux Prime was released that if players built on pipe and went to a little spot in the back of the machine and touch the back of the imagination brick in the glass they could still have gotten it, this was fixed after Crux Prime was released.

The pipes players must build with

The Chaos cleaner with both consoles built, neither activated

The Chaos Cleaner Built, one activated

Both consoles built and activated. The imagination brick would appear on the middle platform. 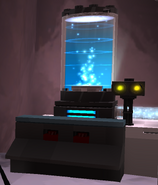 The chaos cleaner, neither consoles built 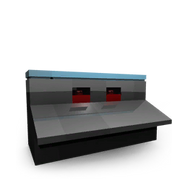 A render of one of the consoles
Add a photo to this gallery
Retrieved from "https://legouniverse.fandom.com/wiki/Chaos_Cleaner_Machine?oldid=155280"
Community content is available under CC-BY-SA unless otherwise noted.