Coalessa is an Assembly Mystic who oversees Pet Cove.

After the shattering of Planet Crux, Coalessa rescued many pets that survived the destruction and sought to give them shelter. Once Pet Cove was cleared of Maelstrom and turned into a sanctuary, Coalessa brought her Terrier, Cat, and Bunny pets to the planet chunk and, with her supervision, allowed them to thrive and grow until they could become strong enough to be adopted by players.

When players arrive at Pet Cove after joining a Nexus Force faction, they witness Coalessa and her Lion pet, Nancy, playing a game of Frisbee. However, a seagull interrupts the game and takes the Frisbee to its nest atop the Lighthouse. To get it back, Coalessa teachers players how to tame pets and sends them to retrieve the stolen Frisbee. Upon their return, she rewards players with a piece of the Water Sprayer.

Coalessa then decides to offer players the challenge of taming a total of seven different pets across the LEGO Universe. When players complete this challenge, Coalessa challenges them to find and tame eleven more pets, for a total of eighteen pets, with the promise of a Lion pet as a reward. If players succeed, Coalessa sends them to Crocodile Corner to tame their very own Lion.

The Faction Leaders send their recruits to Coalessa to learn about taming Faction Pets. Assembly builders are sent by Coalessa to find Saber Cat pieces on Crux Prime. Paradox agents are told about the Alien pod, shell, and core left aboard the Venture Explorer. Sentinels learn what to do with a Gryphon egg. Venture League explorers are informed that Stegosaurus love banana sundaes. After completing Coalessa's mission, players may tame their own Faction Pet.

In the alpha test, Coalessa had orange hair with a ponytail, a less detailed version of her beta outfit, and a Tiki Staff. When Pet Cove opened in the beta test, her custom hair and staff had been modeled, but her outfit had not been completed, and she temporarily used Sky Lane's outfit. This was then replaced with her final outfit in mid-beta. However, during late beta and into release, players complained this outfit was too revealing, and she was altered once again to have a similar style but more decent outfit. Her final outfit was released on October 21, 2010. 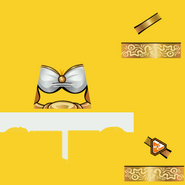 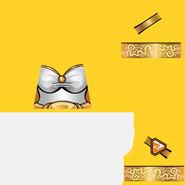 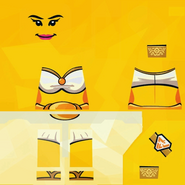 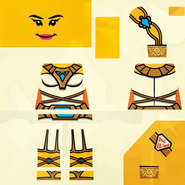 A glitched version of Coalessa

Coalessa spawned in a by a Mythran in Red Blocks
Community content is available under CC-BY-SA unless otherwise noted.
Advertisement