Crafting refers to taking two or more items and combining them together to gain a better item. However, a new feature, cooking, was added in the Ninjago Monastery following the Ninjago: Masters of Spinjitzu (v1.10) update.

Cooking is the process of crafting food. It involves a cooking vendor crafting certain consumables into higher-level consumables. This feature is predetermined; players cannot combine random consumables together to create new ones, as they must follow certain recipes.

Unconfirmed Name: Although this article is based on real information, the name is unconfirmed.

Reforging is the process of crafting new weapons. It involves a forging vendor moving bonuses from one weapon onto another weapon. This feature was not released.

Based on concept art, there are two slots the player needs to drag items into. They would then see a preview of the final product, and, after hitting a "buy" button, an animation would play. 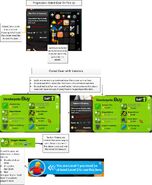 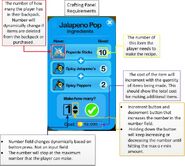 Retrieved from "https://legouniverse.fandom.com/wiki/Crafting?oldid=160729"
Community content is available under CC-BY-SA unless otherwise noted.