Creepy Crawly Forest was a pocket in Wonderland.[1] As the name suggests, it was a dark forest filled with bugs. It was eventually cut from Wonderland.

A map of Wonderland from some point in 2008, notably lacking Creepy Crawly Forest

Concept art for a rebuild puzzle

Concept art by Dave Kang, showing an idea that would later be re-used in Gnarled Forest 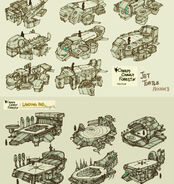 Retrieved from "https://legouniverse.fandom.com/wiki/Creepy_Crawly_Forest?oldid=160357"
Community content is available under CC-BY-SA unless otherwise noted.