Cringe Lo is a cowardly NPC in the Lightning Dojo of the Ninjago Monastery. He is described in-game as a Good-for-nothing.

Cringe was the assistant of Bubu Mumu, however went missing. Bubu sends players to find Cringe, who is hiding in the attic of the Lightning Dojo. Cringe explains that he's lovesick for Nya, and will return to work when he's finished his love note.

Being unable to decide what to write, he asks players to obtain 10 fire fruit from the Fire Dojo. When players return, he eats it quickly, gets heartburn, and is inspired to finish his note. He then asks players to give the note to Nya, who he hopes will become his girlfriend. Cringe is to frightened to do it himself.

Nya is disgusted that Cringe is not brave enough to even give it to her himself, and turns him down saying she only likes brave Ninjas. Cringe is crushed and says he will prove himself. He asks players to tell Bubu that he has quit his job, and he is off to prove his braveness.

When the player tells Bubu, he becomes furious and says that the useless piece of tofu will likely try to "prove himself" by traveling to the Ninjago Caves. He sends them to find him and get him out. Players find Cringe in the Cave of White Whispers, who is scared half to death. He asks players to smash a Bone Wolf and retrieve its paw so he can show it to Nya.

When players do so, he has calmed down, and he takes the paw to Nya, asking players to visit him again in the Lightning Dojo when he's done. Players return to him and find his heart broken, as Nya has rejected him again. With a sigh, Cringe says that he'll stay in the Lightning Dojo, as now he has no job and no girlfriend.

Cringe Lo in the Dojo of Lightning

Cringe in the Cave of White Whispers 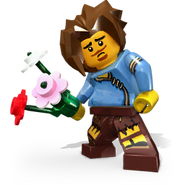 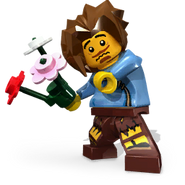 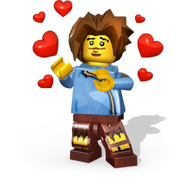 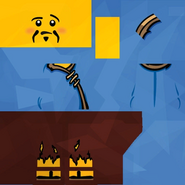 Cringe Lo's texture with an unused face
Add a photo to this gallery
Retrieved from "https://legouniverse.fandom.com/wiki/Cringe_Lo?oldid=136442"
Community content is available under CC-BY-SA unless otherwise noted.