"Hey! Get a move on! This is Crux Prime, not Maelstrom Prime!"- Bronson Jarls

Crux Prime is the world on which Nexus Tower is situated. It is still a scene of heavy fighting between the Maelstrom and the Nexus Force. It is a jagged landscape patrolled by the most powerful Maelstrom monsters, which are known as Stromling Invaders, or just Invaders. This world was released on February 8th, 2011. Being the largest world it offers up the most amount of U-Score, enough to get from Level 30 to Level 40.

After completing missions for Duke Exeter, players are able to travel to Crux Prime via a Teleporter in Nexus Tower and talk to Brannan Landers. Brannan is attempting to control the fight on Crux Prime, however, he is worried about a pilot named Sherland Powers, who flew too close to the Maelstrom cloud surrounding the planet and crashed.

Brannan sends the player to find Sherland, who is pinned down under a Shield Generator in Rivendark Canyon. Sherland partly mistakes the player for being in poor shape, and tells them to smash Koi Wreckage to help survive. Once players return to him, Sherland sends them to Heimlich Stewblaster to buy healing barbecue to treat his wounds. Once he has been healed, Sherland tasks players with recovering secret data regarding the Imagination Nexus from his destroyed Nexus Talon Dropship located in Aura Mar. Once players rebuild the computer and return the salvaged data to Sherland, he expresses his thanks and asks for another favor. Sherland's Shield Genarator is surrounded by Stromling Admiral Invaders, and he requires the player to smash 15 of them since he has no weapons. Finally, Sherland sends players back to Aura Mar to detonate some missles that fell from his ship when he crashed. Once they have completed this task, Sherland thanks the player and informs them that he requires no further assistance.

If players return to Sentinel Point Zeta, they will learn that Brannan once again has his hands full, both with a shield generator issue and with a mysterious ninja, who saved him from even more mysterious Skeletons. He sends them on two different missions, to repair a shield and to find the ninja who saved him.

When players arrive at the Ninjago Monastery Ruins, they find the Ninja of Imagination Neido. Neido explains that he has been sent to Crux Prime by Sensei Wu to get help from the Nexus Force. However, he has lost all of his Ninjago Scrolls. He sends players on a search through Crux Prime to find all ten of them. Once players return to the Ruins with all ten Scrolls, Neido places them on a shrine and tells the player to read them to learn more about Ninjago. Upon interacting with the Shrine, players can read the Scrolls, which explain the history of the Ninjago Monastery and how the Ruins arrived on Crux Prime. Once the player has finished reading, Neido rewards them with a Spinjitzu dagger so they can begin their training in the ways of Spinjitzu. Once the player demonstrates their newfound skills to Neido, he informs them that they are ready to begin training. He sends them into the Maelstrom Quarry to practice their Spinjitzu by killing skeleton miners who are mining Maelstrom Ore from Crux Prime's crust. Once they return, Neido tells players they must stop the Skeletons' mining efforts and directs them back into the Quarry to detonate five of their Bone Fracture Bombs. Afterwards, Neido requires players to destroy three Skeleton Engineers who are "masters of strange technology". After players complete this mission, Neido tasks them with rebuilding three Skeleton Growlspeakers in another attempt to disrupt mining efforts. Next, Neido has players destroy one of the Skeleton's large Skeleton Drilling Rigs. Finally, players learn from Neido that they must destroy a Skeleton Watchtower and recover six pages of skeleton schematics. When players return to Neido with the schematics, he is puzzled to see that the pages are not skeleton technology schematics, but pieces to a map. He studies the map pieces and realizes that they lead to some kind of buried creature located at the other end of the Maelstrom Quarry. Once players arrive there, they find a pet dig, that, upon completion, allows them to tame the Skeleton Dragon pet. When players show the Skeleton Dragon to Neido, he directs them to Pet Cove to speak with Coalessa about the new pet. Coalessa informs players that the pet loves to dig, and send them to Mardolf the Orange to figure out what it digs. Mardolf says he knows what the pet digs and routs players back to Crux Prime to dig up 10 bones. Mardolf turns the bones into Racecar and Rocket pieces and informs players that he can do this with any bones they bring back to him.

If players return to Neido, he tells them that he is missing the basic comforts of the Ninjago Monastery. He sends them to water and collect ten Aura Blossoms scattered throughout Crux Prime. When players return with the petals, Neido turns them into Sensei Wu's Imagination Tea. After giving the player tea, Neido tells them about Nuckal, the skeleton overseer who rules over the quarry. He tasks players with killing Nuckal and taking one of the crystals that he is searching for. When players return with the crystal, Neido directs them to Forbidden Valley to talk with Rad Eccles about the mysterious crystal. Rad Eccles tells them to build his console so he can analyze the crystal. After analyzing the crystal, he informs players that the crystal is made out of concentrated Maelstrom and that the skeletons can use it to forge weapons and armor and power their machines. He sends players back to Crux Prime to warn Neido about this new danger from the skeletons. When he hears this, Neido realizes that the skeletons are mining Maelstrom because it can protect them from Spinjitzu.

Crux Prime was released in February with the promise that more Ninjago content was on the way. However, at the time, players were given the use of a Spinjitzu Staff from Sensei Wu. After the Ninjago Update, the staff was changed to a dagger.

Additional gear sets released at the time were the Skeleton Suit and the Mosaic Jester. Two other sets of gear were based off of classic LEGO characters: "Batlord" from the 1997 Fright Knights theme, and "Explorien Bot" from the 1996 Exploriens theme. These marked the first four Non-Faction Specialty kits, including Sensei Wu and Neido's spinjitzu suit kit.

Crux Prime is home to the Skeleton Dragon Pet after the incident which landed the Ninjago Monastery Ruins on Crux Prime.

The Pet originated in the Ninjago Underworld, however, when Sensei Wu flew the Ruins into Crux Prime, it was brought along, unknown to him. Players were able to tame the beast after completing a mission chain, however when Wu returned to the Ninjago Monastery, he did not leave the knowledge with Neido, who was forced to find out for himself.

The Dragon can be tamed after completing several missions for Neido.

The Maelstrom Quarry is a quarry where Skullkin overseen by Nuckal mine for Maelstrom Ore. This area is especially dangerous for players who do not have the Imagination Spinjitzu items set due to increased damage from Skullkin.

Studburst Pass is one of the only safe areas of Crux Prime. Heimlich Stewblaster can be found wandering around here selling useful consumables.

A small monastery built by Neido, left in ruins after Skulkin attacks.

Sentinel Point Zeta is the area players first arrive in on Crux Prime and is home to a few NPCs.

Aura Mar is one of the most dangerous battlefields on Crux Prime due to it being so big and containing so many dangerous enemies.

Caldera Mar is a large battlefield covered in floating platforms where Maelstrom Dragon Invaders can be found. Below it is another dangerous battlefield.

This battlefield is the smallest battlefield on Crux Prime. Players are required to build a bridge across a crack in the planet to gain access to this area.

Johnny Thunder, on Nimbus Station, asks players to find some floating treasure chests he hid on Crux Prime in the mission Crux Prime Treasure Hunter. There are 8 located throughout Crux Prime. This map shows the location of the 8 chests.
SPOILERS Click to show Crux Prime Chests 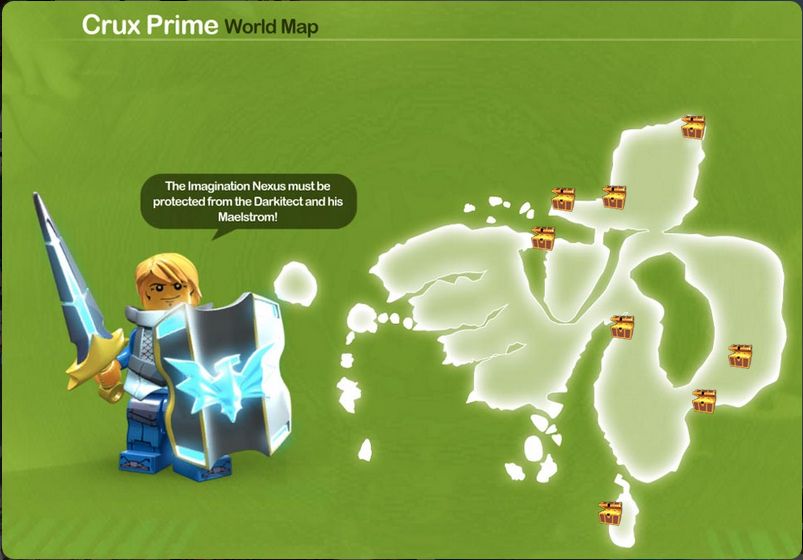 Flags allow players to increase their life. There are 16 around Crux Prime. Here is a map to help players find them.
SPOILERS Click to show Crux Prime Flags 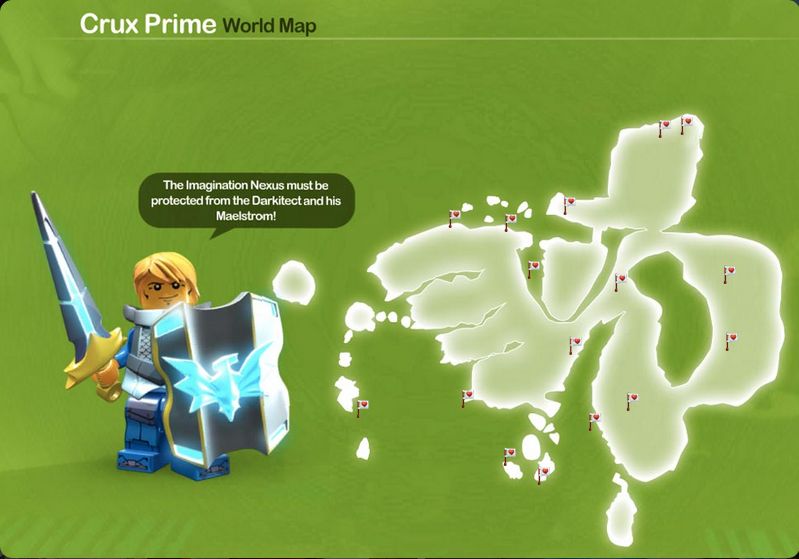 The imagination brick increases players' imagination storage by one. This map shows where the one in Crux Prime is located.
SPOILERS Click to show Crux Prime Imagination Brick 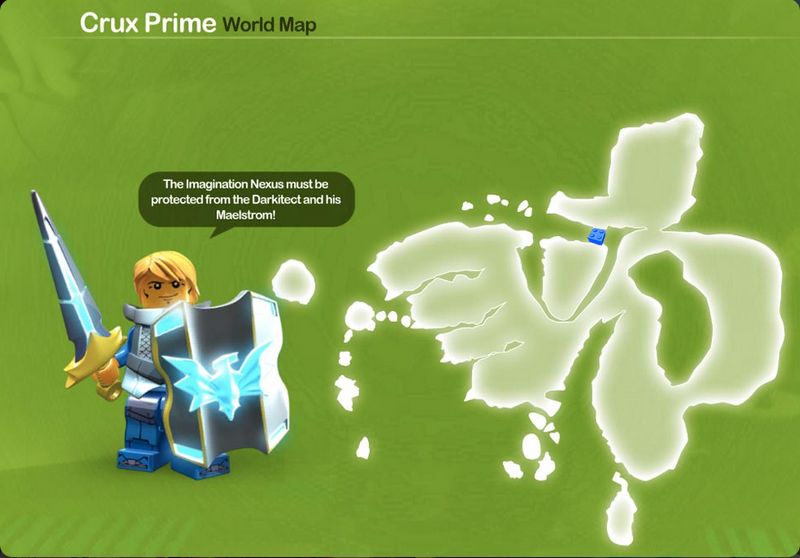 Like most worlds, Crux Prime has binoculars that allow players to view interesting points in greater detail. There are 10 in Crux Prime.
SPOILERS Click to show Crux Prime Binoculars 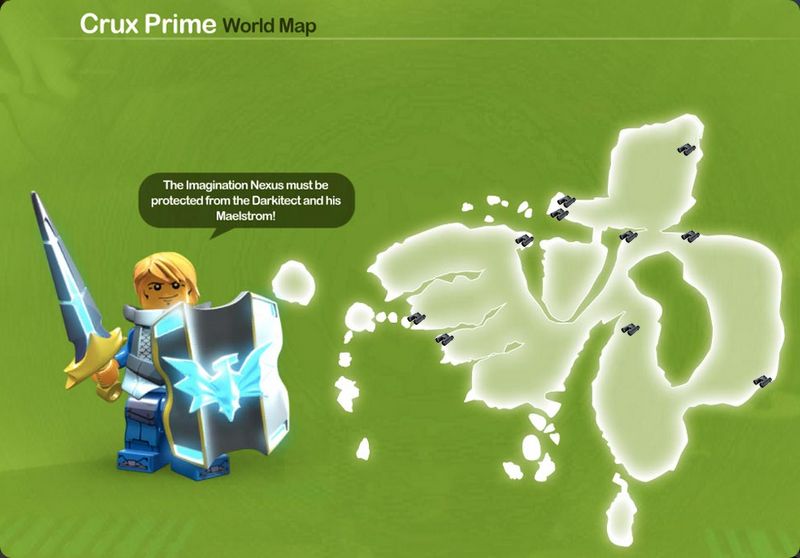 One of the collectibles unique to Crux Prime are Aura Blossoms. They are used to create Neido's Imagination Tea. 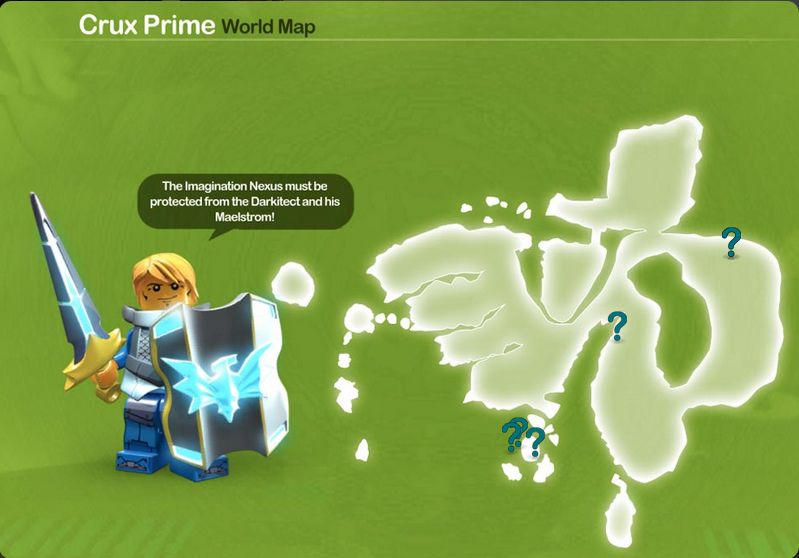 Bone digs are used by the Skeleton Dragon pet to dig up bones, which can then be converted into race cars and rockets by Mardolf. Below is a map of the Bone Digs on Crux Prime. 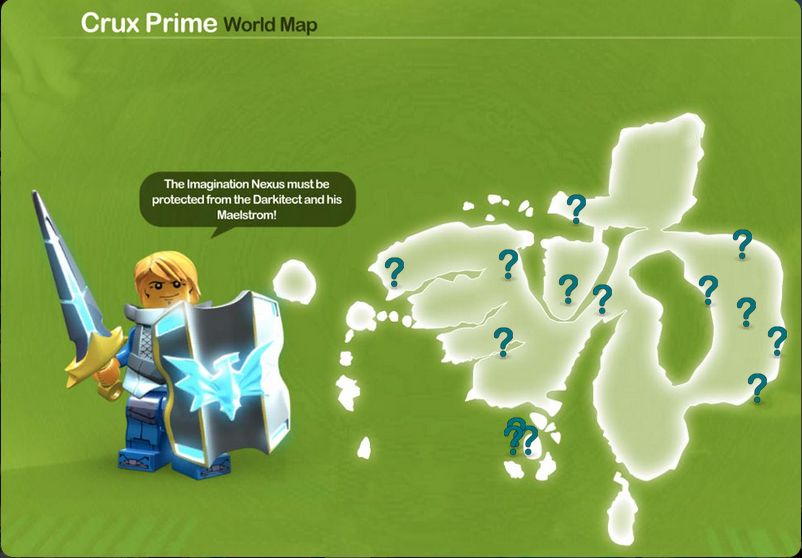 The Ninjago Scrolls are collectibles scattered throughout Crux Prime that are used in the mission The Scrolls of Ninjago. 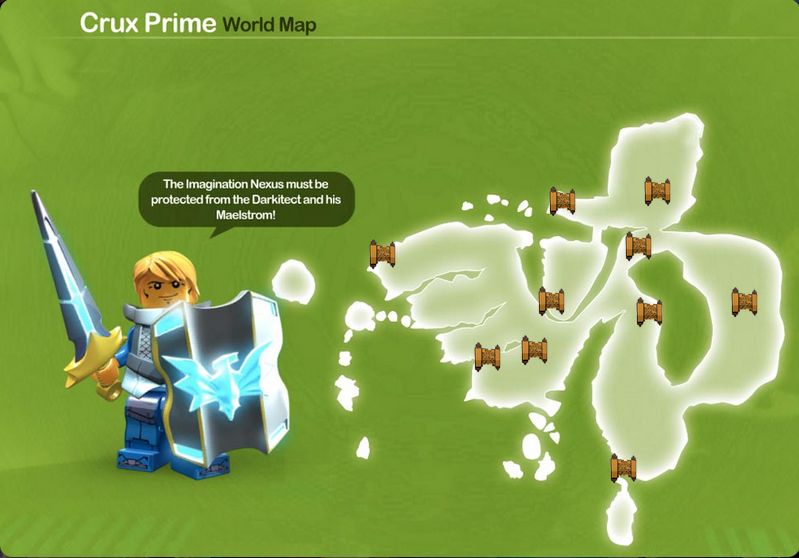 An early version of Brannan Landers

A Ninjago ninja in Training

Nexus Tower in the background

A Skulkin with mining gear

Sign pointing to Crux Prime before the Nexus Tower update 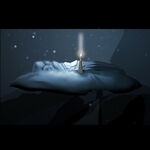 Overview of the planet chunk 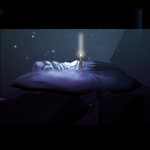 Early Crux Prime map - note the name "Nexus Battlefield", the "Ruins" over Rivendark Canyon, and removed area to the east of the Maelstrom Quarry
Add a photo to this gallery

Retrieved from "https://legouniverse.fandom.com/wiki/Crux_Prime?oldid=160149"
Community content is available under CC-BY-SA unless otherwise noted.