DJ Studd stands on the second-highest platform in the Red Blocks Amphitheater. There, he stands behind his turntable device and acts as a disc jockey, occasionally adjusting the record discs and pressing a hand to his ear. If players talk to DJ Studd, he encourages them to play a instrument if they have enough Imagination.

During beta testing, DJ Studd was unnamed and instead identified as Concert DJ. 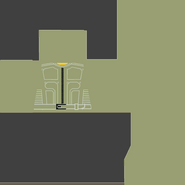 DJ Studd's body texture
Add a photo to this gallery
Retrieved from "https://legouniverse.fandom.com/wiki/DJ_Studd?oldid=135441"
Community content is available under CC-BY-SA unless otherwise noted.