Dark Ronin are ancient suits of armor which have been animated by the Maelstrom.

Long ago, brave warriors faced the forces of evil on Mantis Rock. They have since presumably passed away, but their armor was placed on ronin statues to populate Forbidden Valley in memory of the brave warriors. However, the Darkitect came to Forbidden Valley and used his Maelstrom powers to bring the suits of armor to life as Dark Ronin. The Dark Ronin whispered to the Darkitect, telling him how to enter the dreams of sleeping Ninjas, ultimately leading to the creation of the Maelstrom Dragons.[1]

Dark Ronin served as soldiers in the Battle of Nimbus Station, fighting under the command of Whack Bliddo and the Four Riders of the Maelstrom. Players can go back in time using Wenn Wuzzit's Time Twister to combat the Dark Ronin in this legendary battle.

In Forbidden Valley, Dark Ronin populate Mantis Rock, Cavalry Hill, and Forbidden Passage in their inanimate statue forms. If players approach a ronin statue, the statue will crumble and reveal a Dark Ronin, which will proceed to attack the player who awoke it. The ronin statue has 3 Life and, if players act quickly, can be smashed before the Dark Ronin awakes, preventing the Stromling from spawning. If players fail to smash the statue, they must battle the awakened Dark Ronin, which has 12 Life and will attack quickly with its katana. Although dangerous in large numbers, Dark Ronin are also popular among players for farming due to the Dark Ronin's high loot drop rate.

As part of the Great Tree Ninjas' training, Smashmaster Foom sends players to prove themselves by smashing ten Dark Ronin. Bill Shido teaches players about the tactic of smashing ronin statues before the Dark Ronin awake, then makes a bet with players to smash twenty of the ronin statues.

In the Forbidden Valley Dragon Battle, Dark Ronin are spawned in pillars of fire created by an unnamed Maelstrom Dragon flying around the valley. These Dark Ronin can be quickly dispatched by players, due to having only 4 Life in this instance. The main purpose of these Dark Ronin is to supply players with power-ups, since these Dark Ronin drop no loot but lots of Life, Armor, and Imagination power-ups.

In beta testing, ronin statues appeared in much larger numbers in Mantis Rock, causing Dark Ronin to spawn much more frequently. Until the Frostivus update, Dark Ronin had different sound effects and a lower-pitched voice.

When the fourth Maelstrom Dragon of Maelstrom Valley was first given the ability to summon enemies into battle, its fire pillars spawned Stromlings. However, despite their appearance and animations, the Stromlings were identified as Dark Ronin and behaved similarly to the Dark Ronin in the released version of the game, implying that they were originally intended as Dark Ronin. 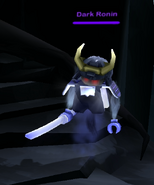 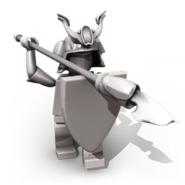 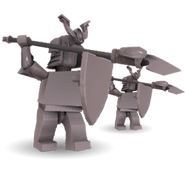 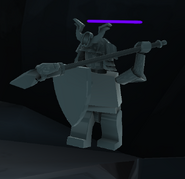 A Daredevil fighting a swarm of Dark Ronin 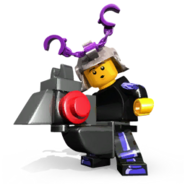 Ronin Disguise
Add a photo to this gallery
Retrieved from "https://legouniverse.fandom.com/wiki/Dark_Ronin?oldid=160427"
Community content is available under CC-BY-SA unless otherwise noted.