DeepFreeze is one of the four worlds that originally debuted at BrickCon 2010. It was created by the Canadian World Builder League team Luptario, and is set in a snow-themed enviorment. It is said to always be cold from the lake effect.

Much of the ground is covered in ice, making walking difficult in certain areas. Penguins make DeepFreeze their home, as well as two bears building a snowman, and a Zamboni, which constantly travels around keeping the ice smooth.

The woodland creatures, including Dee the Chickadee, have been forced out of their homes by Maelstrom Beavers, who apparently bite them if they attempt to return. Dee asks players to smash several of them; upon completion, he reveals that Chester the Moose has a more serious problem.

Chester is lost in DeepFreeze, and wants to get home. However, because of the slippery ice and snow, he's unable to grip the ground. Figuring that some snowshoes would do the trick, he sends players to collect some from ice cubes along the ground.

When they return, he's too cold to travel, and needs something to eat. Players must now smash snowmen and find carrots for Chester, who happily snacks on them before beginning the journey home.

After all missions are completed, you can put together a rocket in the shape of a Evergreen tree.

Chester the Moose
Dee the Chickadee 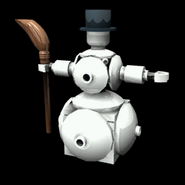 A Deep Freeze Penguin
Add a photo to this gallery
Retrieved from "https://legouniverse.fandom.com/wiki/DeepFreeze?oldid=127260"
Community content is available under CC-BY-SA unless otherwise noted.