Dominic Knack is a Gear Vendor in Nimbus Station.

Dominic Knack's shop can be found at Red Blocks Amphitheater. There, he sells Notion Potions, Imaginite Crystals, and a variety of clothes. Most notably, Dominic Knack's inventory includes Party Pants, which can be bought and given to Milo Snackpigeon. 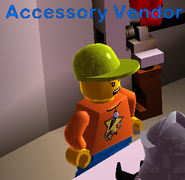 Dominic Knack in beta testing
Add a photo to this gallery
Retrieved from "https://legouniverse.fandom.com/wiki/Dominic_Knack?oldid=154351"
Community content is available under CC-BY-SA unless otherwise noted.