Echs Ray is a Paradox Scientist who oversees operations at the Paradox Refinery in the Forbidden Valley.

When Wisp Lee's studies of the Maelstrom show only chaos, he sends players to ask Echs Ray to analyze the data, hoping that Echs will provide a greater insight. Echs Rays studies the Maelstrom data from Wisp Lee and comes to the horrifying conclusion that Baron Typhonus is still alive and controlling the Maelstrom as the Darkitect. He sends players to give the results to Master Fong Shader, believing that he has done all that he can and the rest is up to the Paradox leaders.

Maelstrom forces smash the pipes that bring power to the Paradox Refinery, interrupting Echs Ray's research. He sends players to repair all three pipes so that their pressures may equalize and restore power to the facility. Once the three pipes are repaired, Echs Ray resumes his experiments.

In beta testing, Master Fong Shader sent players directly to Echs Ray, and Wisp Lee was not included in the mission chain. For most of beta testing, The System is Down was offered as a repeatable mission in a precursor to Daily Missions, but in the released game, the mission can only be completed once per Minifigure.

Prior to the Ninjago Monastery update, Echs Ray sent players to warn Sensei Wu about the Skulkins' mining activities. 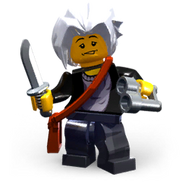 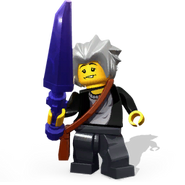 Echs Ray holding a Maelstrom Dagger
Add a photo to this gallery
Retrieved from "https://legouniverse.fandom.com/wiki/Echs_Ray?oldid=131407"
Community content is available under CC-BY-SA unless otherwise noted.