Enrique Tharshebloze is a Pirate Lookout NPC in the Pirate Camp in the Gnarled Forest. He sits in front of a campfire and hangs out with Diablo Phil. He has no missions or dialogue, and he currently remains merely a background character.

In the alpha and early beta testing, Enrique Tharshebloze was an unnamed pirate who wore a red bandana, a sleeveless blue-white striped shirt, and light-gray pants. Rather than sitting down, this unnamed pirate stood near his campfire. In the mid-beta testing, Enrique replaced this unnamed pirate, although at first he wore a First Mate's Jacket and wore no hat, exposing his thick blond hair. He was later given a beta Admiral's Hat which was worn at a different angle than its released version and was colored dark-blue with a blue plume. 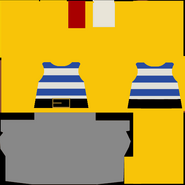 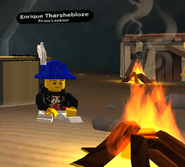 Enrique in-game
Add a photo to this gallery
Retrieved from "https://legouniverse.fandom.com/wiki/Enrique_Tharshebloze?oldid=100983"
Community content is available under CC-BY-SA unless otherwise noted.