The Fireman was a pre-alpha NPC located in Avant Gardens.

The Fireman was removed from LEGO Universe when Red Blocks was moved from Avant Gardens to Nimbus Station, and never appeared in the released game. 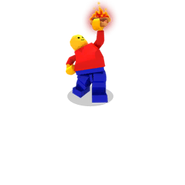 Bob holding a Burno Dog
Add a photo to this gallery
Retrieved from "https://legouniverse.fandom.com/wiki/Fireman?oldid=137044"
Community content is available under CC-BY-SA unless otherwise noted.