The Forbidden Valley Dragon Battle (known as both Dragon Instance as well as Dragon's Den) is a minigame where players can fight the 3 dragons solo or as a team of up to 4 people.

The original dragon area was not a minigame, but was actually an area in the game. Dragons spawned on the platforms where they do now, similar to the Maelstrom Dragon Invaders on Crux Prime. This was changed on July 30 2010, during the Beta Phase. This cange was due to "kill stealers", and was made so that awards and smashes could be equally distributed among players within the Instance.

Burno was compatible with the redesigned Forbidden Valley, however, it appears the new dragons seen today were not. When first released in beta, the new dragons were, for the most part, see-through. Parts which were visible were silver. Since the dragon battle instance was added shortly after this was made aware to developers, it can be speculated that this also influenced the change. 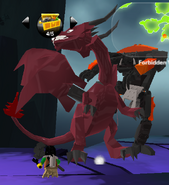 A map of the Dragon's Den
Add a photo to this gallery
Retrieved from "https://legouniverse.fandom.com/wiki/Forbidden_Valley_Dragon_Battle?oldid=148412"
Community content is available under CC-BY-SA unless otherwise noted.