Frakjaw is the Skeleton of Fire.

Frakjaw and an army of Skulkins invaded the Ninjago Caves and traveled to the Cave of Black Echoes to find the Fire Shrine and Sword of Fire. Sensei Wu sends players to stop Frakjaw before he can get the Sword of Fire.

Frakjaw is the boss of the Ninjago Monastery world. He can only be fought in his own 1-4 player battle instance called Battle Against Frakjaw!, which takes place at the Fire Shrine and can only be accessed by a Fortress Dragon Statue.

When players arrive at the Fire Shrine, Frakjaw summons a wave of Skulkins, usually consisting of Skeleton Raiders, Skeleton Mad Scientists, Skeleton Blacksmiths, and Skeleton Troopers. When these enemies are defeated, a Quick Build for a Skull-a-Ton appears, which can be built right above Frakjaw's head. It falls and lands on Frakjaw, depleting a third of his armor meter.

Frakjaw summons another wave of enemies, this time also including Bone Wolves and Skeleton Commandos. Defeating these enemies drops another Skull-a-Ton Quick Build, which depletes another third of Frakjaw's armor. Frakjaw tries again to defeats players by summoning a third wave, ultimately ending with a third and final Quick Build. This Skull-a-Ton fully depletes the remainder of Frakjaw's armor.

Frakjaw climbs down from his perch and fights players himself, summoning another wave to assist him. Like Chopov, Krazi, and Bonezai, Frakjaw's Maelstrom Spinjitzu causes deadly Maelstrom Poisoning, but encompasses a much wider radius than his predecessors. When his minions are defeated (and if the instance is being played with 3-4 players), Frakjaw summons another wave of enemies to take their place.

Eventually, Frakjaw is smashed. He only drops mission-related items, such as his jawbone, and a final Quick Build that assembles a Fire Lantern, allowing players to access the Fire Shrine, collect the Sword of Fire if they haven't already, and open a Treasure Chest full of loot.

Furious Urufu, needing something to pick his teeth, sends players to fight Frakjaw again and collect his jawbone. Nya, who claims that Frakjaw is one of the few things that she fears, also sends players to smash Frakjaw and take his Maelstrom Battle Mace for purification via Portable Chaos Cleaner.

You should never play with fire, so stay clear of Frakjaw. His bones are sizzling, and he’s hazardous to your health. He’s a crispy barbecue whose burning anger has left a trail of ashes behind him.

Frakjaw may love roasting marshmallows, but his marshmallows are on the end of a swinging, spiky mace ... so watch out!

Frakjaw is a minion of Lord Garmadon and formerly Lord Samukai, and was sent by his masters to collect the Four Weapons of Spinjitzu. His actual in-story role has been minimal, although he stole the Golden Scythe of Quakes and participated in the Lightning Dragon Battle. According to his Character Bio on LEGO.com, Frakjaw was present in the Ninjago Underworld and witnessed the four ninjas forming the Tornado of Creation in Weapons of Destiny. Frakjaw also makes a playable appearance in LEGO Battles: Ninjago. 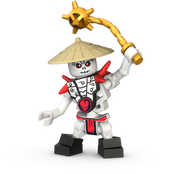 A glitch in which Frakjaw's health bar does not appear 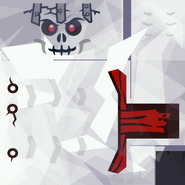 Frakjaw's texture
Add a photo to this gallery
Retrieved from "https://legouniverse.fandom.com/wiki/Frakjaw?oldid=154837"
Community content is available under CC-BY-SA unless otherwise noted.