The Front End, also referred to as the Login Screen and Character Select screen, is the first element players see after launching LEGO Universe.

The Login Screen has a white/blue background, with a few minifigures and other characters running around in the background. Bob is seen in the front of the log in section itself. He covers his eyes when players enters their passwords, and then the scenery zooms off to the Character Select Screen.

While logging in, a number of animations play in the background. A character dressed like a Nexus Astronaut gets chased around by a black-purple dragon, but the tables turn when the Nexus Astronaut grabs a Sentinel Knight Sword and Shield. A Stromling pops up from the edges of the screen or from behind the log-in area to stare at the player. A Stromling Ape roams about, roars at the player, and is ultimately smashed by a minifigure launching himself out of a cannon. Two minifigures in Race Cars race each other, only for one to crash his car off-screen.

There are four minifigures on the Character Select Screen. If the player is just beginning LEGO Universe, he or she will find that there are four empty Minifigures with Creative Sparks floating in them. If the player already has minifigures, the one in the front appears to be excited, with the other three saddened. When the player clicks the create a Minfigure button, the player will be able to select a hairstyle, head, Shirt, and Pants, along with a few color optimizations for each. Once the player is done, he or she can either choose a custom name or a name from the "Nameinator". Once he or she has done that, they can click play to enter a LEGO Universe server. Upon clicking the Delete button on a minifigure, the player will be prompted asking to confirm deletion. Once the player types in his or her password, the minifigure will be vacuumed into non-existence, and it's Creative Spark will be left for the player to create a new character.

In alpha testing and early beta testing, different animations played in the background of the Login Screen. Similar to the final version, Bob got chased around by a classic green dragon, then donned a knight's helmet and a scimitar and proceeded to chase the dragon. Then, Bob built himself a jetpack and flew around with it. Finally, in the distance, Bob built a robot and got chased away by it.

In mid-beta testing, the dragon animation was revised to its current state. However, the dragon was still green with lime highlights, the minifigure being chased wore a Mail Shirt with Belt and Brown Pants, and waved to Jetpack Bob, who was still included in the animations. In a later iteration of the dragon animation, the dragon was colored black with orange wings, the minifigure wore a Breastplate of Armor 1 and Dark Gray Pants, and he donned a Knight Helmet 3 in addition to the sword and shield. Jetpack Bob was removed, and the newly-introduced Stromling Ape had the same textures as the in-game enemy. 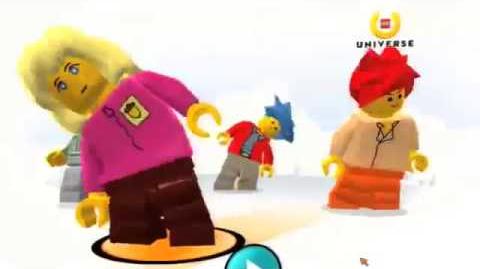 The Front End until a week into Alpha testing 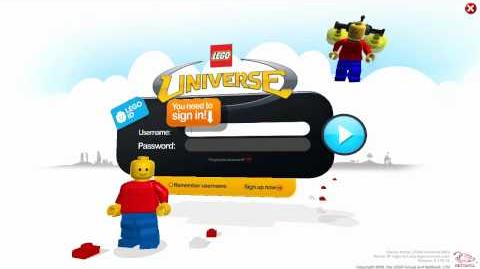 Stromling on the login screen

Stromling Ape on the login screen

It is possible to spawn into the Front End, but the animations do not play.

Rough storyboards for the NetDevil intro by Dave Kang
Add a photo to this gallery
Retrieved from "https://legouniverse.fandom.com/wiki/Front_End?oldid=160437"
Community content is available under CC-BY-SA unless otherwise noted.