Furious Urufu is a dog boy in the Ninjago Monastery. He claims to be Sensei Wu's loyal pet; however, he says that Wu never pets him.

When Urufu learns that Skeletons are made from bones, he asks players to bring him 10 rib bones from Skeleton Troopers to chew on. While munching on them, he tells players to dig by the launchpad in the Ninjago Monastery to retrieve a treasure to keep. This treasure turns out to be a Ninjago Hound Treat.

Urufu then claims he is the alpha dog, more fierce than any Bone Wolf is. As if to drive the point home, he sends players to smash 15 bone wolves for him to obtain 15 tail bones. He then states that the tail bones will be buried under the bridge on the Ninjago Battlefield, and if they dig there, they will find a Hobby Hood.

Upon their return, Furious Urufu then decides he needs a good laugh, and asks for Krazi's Funny Bone, in return for a larger reward than previous Missions. He then decides to bury it under the rock face in the Earth Garden, and warns players to watch out for quicksand when he sends them to dig up Kai's First Gi Pants.

Wanting a frozen treat, he next asks for an Eye Bone from Bonezai. Urufu accepts it with much distaste, as he finds it tastes like spoiled ice cream. Still with a treasure to show players, he asks them to dig up Kai's Loungy Pants from the entrance to the Ninjago Caves near Hari Howzen.

Deciding to get players to obtain one more bone for him, he sends them to smash Frakjaw. Urufu says he doesn't care that Frakjaw is a "big boss", and he wants his Jaw Bone. While claiming his dentist will be pleased, he sends players to dig up one last reward in the Ninjago Caves, a Piercing Patch Hood. 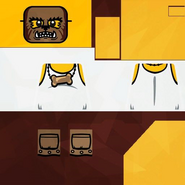 Urufu's texture with an unused face
Add a photo to this gallery
Retrieved from "https://legouniverse.fandom.com/wiki/Furious_Urufu?oldid=150826"
Community content is available under CC-BY-SA unless otherwise noted.