A Guild was a feature similar to teams removed from LEGO Universe sometime before the start of alpha testing. Like teams, guilds had a private chat, and leaders, who could kick members from the guild. However, unlike teams, guilds were not disbanded when all the members logged out. Additional features of guilds included guild leaders being able to set a name for the guild upon creation, members being able to see when other guild members were online, and what worlds other members were in. While guilds were available in the pre-alpha as of April 2009,[1] they were not present in alpha, and never were re-added to the game. Despite this, a non-working guild button could be seen in the list of options after interacting with another player until late beta. Some things, such as Johnny Umami, a poll on the LEGO Universe website, and a developer screenshot of a guild being created in the modern game, indicated that guilds were planned to be re-added to the game at some point, likely in the Kingdoms update. However, due to the closure of LEGO Universe, this never happened.

A LEGO Universe developer creating a guild with the Guild Master

The Menu for managing a Guild 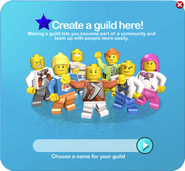 Retrieved from "https://legouniverse.fandom.com/wiki/Guild?oldid=156636"
Community content is available under CC-BY-SA unless otherwise noted.