Gwen Tweenbangle is a Model Vendor in the Assembly Storeroom of the Nexus Tower.

Gwen Tweenbangle has her own dance floor in the Assembly Storeroom. There, she sells primarily Micro City models. However, she sells other models sold by Autumn Helix, including the modules of the Nimbus Station Rocket.

When players are sent by Ace Warprider to return Gwen Tweenbangle's smoke machine, Gwen remarks that Warprider should have just looked at the sky above Crux Prime if he wanted a good light show. She tells players that she gave the Thinking Hat to Rutger Hemoglobin and asks them to return the hair gel to him. Knowing that Rutger is a vampire, Gwen wonders if he plays baseball.

Gwen Tweenbangle recently released a new CD, which has been overshadowed by Johnny Thunder's Greatest Hits, the Selection of the Month. Since he can dance to Gwen's music, Doctor Overbuild orders her CD but receives Greatest Hits instead, much to his disappointment. Despite this, Johnny Thunder appears to be on good terms with Gwen Tweenbangle, sending his best regards to the pop star.

Gween Tweenbangle originated as the Pop Star from Series 2 Minifigures.

According to her Bio on the Minifigures website, Gwen Tweenbangle is very famous and popular, with her last three albums going platinum and her videos on non-stop rotation on music channels. Although she travels the world in limos and private jets, she lives an otherwise normal life and likes hanging out with friends at the movies or eating at fast-food restaurants. She is very creative but not very strong. Gwen Tweenbangle costars with Barry Smoothmoves as one of the playable characters in the Disco Dance Challenge online game. 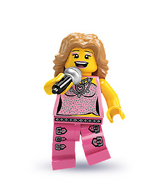 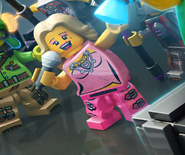 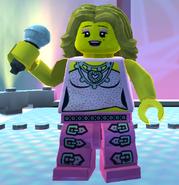 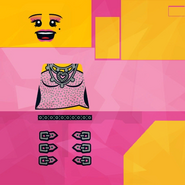