Hardhead is a named Skeleton Miner enemy that was originally intended to be located on Crux Prime. For unknown reasons, Hardhead, along with Blackmarrow, was removed from Crux Prime before the world was added into the game. Despite this, Hardhead remains in the game's coding, and can be spawned by a Mythran and fought. 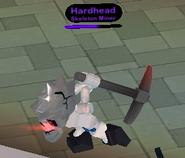 Hardhead spawned by a Mythran in Nimbus Plaza

Hardhead spawned in Nimbus Plaza
Add a photo to this gallery
Retrieved from "https://legouniverse.fandom.com/wiki/Hardhead?oldid=158196"
Community content is available under CC-BY-SA unless otherwise noted.