Heimlich Stewblaster is a Supplies Vendor who wanders back and forth around Studburst Pass.

According to a Nexus Force Plaque, Heimlich Stewblaster's origins are shrouded in mystery, as the Nexus Force has no knowledge of how Heimlich came to Crux Prime. He is found in Studburst Pass, a safe canyon between Sentinel Point Zeta and Aura Mar, where he is always willing to provide aid to travelling Nexus Force soldiers. Among the supplies he sells are faction consumables, making him the only non-Faction Vendor to sell these items, and Cherry Blasts, which can be used in Johnny Umami's Flame-Roasted Popsicle recipe.

After his crash, Sherland Powers caught a glimpse of Heimlich Stewblaster and smelled his BBQ Drumsticks. Having a sudden craving for BBQ, the Nexus Force Pilot sends players to find Heimlich and buy him a BBQ Drumstick.

Heimlich Stewblaster once witnessed a team consisting of an Adventurer, a Space Ranger, a Shinobi, and an Inventor as they fought together against Stromlings, neutralized a nest of Dark Spiderling Invaders, pushed their way through Aura Mar, and had a climatic battle against Butterscorch. He watched the action with his bag of eye-popping popcorn, which improves vision by 600%, but in his excitement he ate his entire stock of the popcorn. Heimlich later recounted the tale, pausing the story only while he sold Thirst Quenchers to thirsty Minifigures.[1]

Prior to the Power of the Nexus Force update, Heimlich Stewblaster held the title of Wandering Chef. Following the update, he stopped wandering the Studburst Pass and remained stationary at all times until the Ninjago update, which restored his wandering abilities. 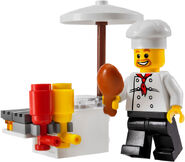 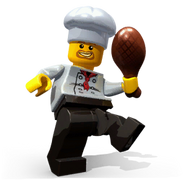 An alternate render of Heimlich

Heimlich Stewblaster as a Wandering Chef

Heimlich Stewblaster without his knapsack or chef hat
Add a photo to this gallery
Retrieved from "https://legouniverse.fandom.com/wiki/Heimlich_Stewblaster?oldid=142156"
Community content is available under CC-BY-SA unless otherwise noted.