Hu Where is a Ninja Picnicker NPC who hangs out at the Avant Gardens Launch Area.

After defeating the Spider Queen and destroying the Maelstrom fog hanging over the Launch Area, players can talk with Hu Where, Swabby Bilgebarrel, and Eeekums to complete the Making Friends achievement. Hu Where is also a Model Vendor. His inventory consists of Ninja and Fortress models for Free-to-Play players who cannot go to Forbidden Valley.

Hu Where is secretly a Paradox agent who came to Avant Gardens to collect a Maelstrom Cube for his master in Forbidden Valley. He sends players to talk to Wisp Lee about getting a Maelstrom Cube. After players return with the cube, Hu Where vanishes to give the Maelstrom Cube to his master, but reappears a few minutes later so players can continue to buy and sell items with him.

He has a reputation for carrying around picnic baskets, as noted by Wisp Lee when players get a Maelstrom Cube from him. He is apparently one of Paradox's top agents because no one ever knows where he is, and he's smarter than the average Ninja.

Models for Sale at this Location

In early beta testing, Hu Where was unnamed; from mid-beta testing until the Crux Prime update, he was not listed as a "Ninja Picnicker". Until late beta testing, he wore a classic-style black Ninja Gi.

Before the Power of the Nexus Force update, Hu Where constantly argued with Swabby Bilgebarrel over who is the better Monument Racer. When not arguing, Hu Where was rather philosophical, believing that a fear of heights represents a fear of greatness in oneself, and believed that building is preferable to smashing, telling players only to smash when low on Imagination.

Hu Where in early beta 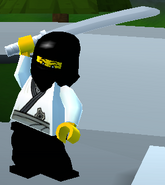 Hu Where in late beta 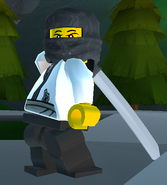 Hu Where in-game
Add a photo to this gallery
Retrieved from "https://legouniverse.fandom.com/wiki/Hu_Where?oldid=154718"
Community content is available under CC-BY-SA unless otherwise noted.