Johnny Thunder is a famous adventurer who is now a Venture League Hero.

As a result of his fame, Johnny Thunder has developed a reputation for bragging to the women at the concert. Players are asked by Johnny to ask Sofie Cushion, DeeDee Light, Green Brockley, and Krista Clear if they would like to meet the famous adventurer himself. Although the women find him strange and annoying, Johnny Thunder appears quite oblivious to this and, as a reward, gives the player an autographed picture of himself. This autograph can be given to Renee Tombcrusher, who has a crush on Johnny Thunder.

Johnny Thunder originated in the popular Adventurers line that ran from 1998 to 2000, as well as its spin-off Orient Expedition line in 2003. He also had appearances in LEGO Studios sets. He has been seen in a large amount of LEGO video games, including LEGO Racers, LEGO Racers 2, LEGO Island 2, LEGOLAND, LEGO Stunt Rally, and LEGO Soccer Mania. He is an NPC in the online LEGO.com game Backlot, as an actor in a movie at LEGO Studios. He also starred in two of the LEGO Comic Adventures, The Restless Mummy and The Lost Treasure, as well as numerous Adventurers and Orient Expedition flash games.

Before coming to the Nimbus System, Johnny had already had many travels and had found countless treasures on Earth. His major expeditions include retrieving the Re-Gou ruby from an an ancient temple in Egypt, preventing Señor Palomar from stealing the Sun Disk in the Amazon, thwarting a plan to capture dinosaurs from Dino Island, and recovering Marco Polo's Golden Dragon - a journey that took him through India, to the top of Mount Everest, and to the city of Xi'an in China.

From late beta testing to the Crux Prime update, Johnny Thunder's image in the Passport depicted him with his classic Adventurers face. Although file divers have found textures for this face in the game files, it appears that the game designers will not be using them, seeing as the Crux Prime update changed his Passport image to feature his in-game facial features.

Prior to the Power of the Nexus Force update, Logan Moonshot sent players to find Johnny Thunder. 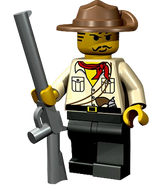 Johnny Thunder, as seen in the LEGO Adventurers line 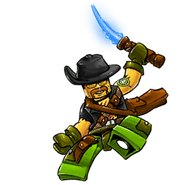 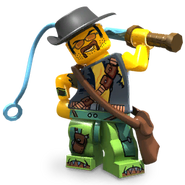 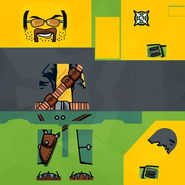 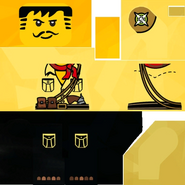 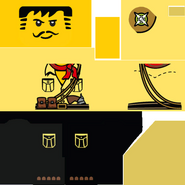 Johnny Thunder, as he appears in-game 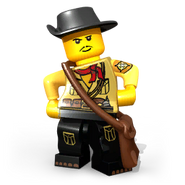 Johnny Thunder's Autograph
Add a photo to this gallery
Retrieved from "https://legouniverse.fandom.com/wiki/Johnny_Thunder?oldid=158158"
Community content is available under CC-BY-SA unless otherwise noted.