Kammy Kazei is Gear Vendor who works at the Paradox Refinery in Forbidden Valley.

For most of beta testing, Kammy Kazei was unnamed and simply identified as Accessory Vendor. She also wore a classic black Ninja Gi and violet pants. 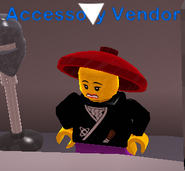 Kammy prior to the Nexus Jawbox update
Add a photo to this gallery
Retrieved from "https://legouniverse.fandom.com/wiki/Kammy_Kazei?oldid=154315"
Community content is available under CC-BY-SA unless otherwise noted.