Kenjin the Wise is a Ninja Sage NPC in Forbidden Valley.

Kenjin the Wise is the old master who taught Master Fong Shader, and took myriad breaks to visit Dragonmaw Chasm during their training. He is over 150 years old, and over the past few decades, his birthday presents have included an Imagination lava lamp, shuriken- and shinobi-patterned pajamas, and an autographed copy of the Johnny Thunder autobiography.[1]

Ninja Tashi sends players to find a way past Ravencloud Gate, where they will meet Kenjin the Wise on the other side. Deeming players clever and adventurous enough, he sends players to the Great Tree to deliver news of the Maelstrom to his old apprentice, Master Fong Shader.

After the Ninja Prisoners are rescued, Kenjin the Wise hears them discussing the bananas that they ate while locked up in Brig Rock. Curious to know what they are talking about, Kenjin sends players to bring him ten bananas from Gnarled Forest. As he eats the bananas, he rewards players with extra Backpack space.

As Kenjin the Wise celebrated his 150th birthday in 2011, Zip Lash decided to celebrate by hosting a Dragonmaw Chasm Grand Prix birthday extravaganza during the weekend of July 9-10.[1]

Kenjin the Wise as Old Traveler in early beta

Kenjin before the Nexus Jawbox update 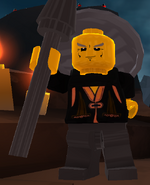 Kenjin in-game
Add a photo to this gallery
Retrieved from "https://legouniverse.fandom.com/wiki/Kenjin_the_Wise?oldid=142815"
Community content is available under CC-BY-SA unless otherwise noted.