Kirsten Quasar hangs out at the picnic area, which has been blanketed with Maelstrom fog, and will not interact with players until the Spider Queen is defeated. Kirsten Quasar is also a Model Vendor. Her inventory consists of models from the Space Fort model set. Interacting with her counts towards the Making More Friends achievement.

Models for Sale at this Location

In alpha testing and early beta testing, Kirsten Quasar had Exo-Force style eyes. In beta testing, she had a line of dialogue claiming that the Maelstrom Mask was on another world. Until mid-beta testing, she was unnamed and identified as Astronaut Picnicker; when she received her name, the title was taken away until the Crux Prime update.

Until the Power of the Nexus Force update, she had conversations with Dusty Holster concerning the Maelstrom fog in the Maelstrom Mine. She talked to players about the importance of settling properties and asked them how many rockets they have built. 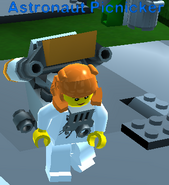 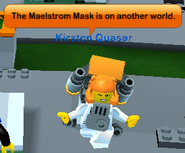 Kirsten Quasar talking about the Maelstrom Mask in beta

Kirsten Quasar and Eeekums in a Treehouse advertisement
Add a photo to this gallery
Retrieved from "https://legouniverse.fandom.com/wiki/Kirsten_Quasar?oldid=157124"
Community content is available under CC-BY-SA unless otherwise noted.