The Kraken is a giant sea monster living in the seas of Gnarled Forest.

When Captain Jack Knife and his crew of pirates sailed the Black Seas Barracuda with a cargo hold full of Maelstrom Crystals, the Kraken sensed the Maelstrom energies and attacked. The Kraken tossed the pirate ship into a tree at Pirate Cove, where the pirates were forced to make a Pirate Camp. Captain Jack Knife wrote about these events in his log.

The Kraken currently stalks the seas around Cannon Cove along with the Maelstrom Armada, causing trouble for the local pirates. During the Cannon Cove Shooting Gallery, the Kraken only emerges during the final round, where it is a challenging target to hit due to its irregular and random movements. Successfully shooting the Kraken will score 10,000 points, which can be increased with score multipliers from hitting numerous targets in a row.

Early concept art for the Kraken shows that it was originally intended to be a land-bound "Pirate Cannon" used for launching players. A storyboard sequence for the Kraken shows the giant squid being hosed down by a pirate as a player attempt to sneak past. The Kraken spots the player, sucks him into its mouth, and then spits the player out, launching the player into the air. It is likely but unconfirmed that the Kraken's role would have been to launch players to areas otherwise inaccessible.

In early beta testing, the Kraken's name was misspelt as "Krakken" in the Pirate Camp Nexus Force Plaque. This was corrected shortly after the misspelling was pointed out to developers. 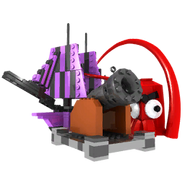 Kraken with Maelstrom Galleon and Cannon
Add a photo to this gallery
Retrieved from "https://legouniverse.fandom.com/wiki/Kraken?oldid=141721"
Community content is available under CC-BY-SA unless otherwise noted.