It is sometimes known as the "Club Station", or "LEGO Club", and was first revealed in the July-August edition of the Brickmaster/LEGO Club Magazine. The code in the magazine was incorrect and void, however, the right one was on the back of the September-October edition of the LEGO Magazine. The code is different for everyone and is one-time use. Players could enter the code at the "My Account" area of the LEGO Universe site.

Getting to LEGO Club Station Alpha

First, players must find their LEGO Club membership number. It can be found on the letter that came with the latest LEGO Club magazine or on the back of the latest magazine, depending on what country the player lives in. The membership number either starts with a 6 or a C. If players have lost the letter or magazine, or haven't received their first magazine yet, they can call LEGO Customer Service on 00800 5346 5555 (in Europe) or 1-800-838-9647 (in North America).

2) On the 'Add Code' page, players must input their LEGO Club membership number in the 'Enter Code' box and click 'Add Code'.

3) Players must wait for their membership number to process. The waiting time will vary but could be just a few minutes.

5) Players must find the LEGO Club Door in Red Blocks. If activation was successful, players should be able to interact with the door. If players still cannot enter, they should repeat the steps or call tech support.

In Beta, the LEGO Club Door was present, but would not allow players in. However, there were various bugs discovered that allowed players to bypass the activation key and access the Club Station Alpha. One notable glitch in the world itself was that the station's windows were not solid, allowing players to jump through and go out-of-bounds, landing on a strip of land that was home to a Skunkbuster. 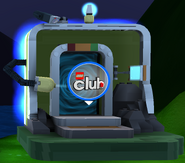 Retrieved from "https://legouniverse.fandom.com/wiki/LEGO_Club_Station_Alpha?oldid=158089"
Community content is available under CC-BY-SA unless otherwise noted.