Leroy Duddsmith is a Clothing Vendor whose shop is located in the Race Place at Nimbus Station.

Prior to the Nexus Jawbox update, Leroy Duddsmith had purple hair and wore Black Pants. Since many other NPC clothes were turned white with this update, this is likely a glitch, but it was never corrected before LEGO Universe was announced to close. 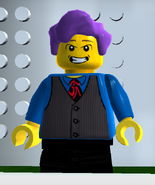 Leroy Duddsmith prior to the Nexus Jawbox update
Add a photo to this gallery
Retrieved from "https://legouniverse.fandom.com/wiki/Leroy_Duddsmith?oldid=132258"
Community content is available under CC-BY-SA unless otherwise noted.