Ludwig Clutchburn is a Racing Vendor NPC located at the Nimbus Station Race Place near the Vertigo Loop Racetrack.

Ludwig Clutchburn stands inside his booth, where he sells racing helmets and racecar modules. Velocity Lane sends players to purchase their first car chassis from Ludwig so she can give them a free pack of racecar modules.

Prior to the Nexus Jawbox update, he sold various other colored helmets. Following the update, this portion of his inventory was largely given to Yam Waterwolf. 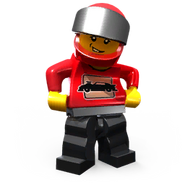 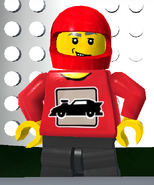 Ludwig Clutchburn in-game
Add a photo to this gallery
Retrieved from "https://legouniverse.fandom.com/wiki/Ludwig_Clutchburn?oldid=157126"
Community content is available under CC-BY-SA unless otherwise noted.