"The Maelstrom is strange and baffling - and yet, oddly alluring."- Echs Ray

The Maelstrom is the dark menace spreading chaos and destruction throughout the LEGO Universe.

The Maelstrom was created long ago by Baron Typhonus. After creating the Spider Boss to demonstrate the power of Imagination without rules, the chaotic spider turned on him and dragged him into the Imagination Nexus. Their combined chaotic ideals corrupted the Imagination Nexus, mutating it into a powerful Maelstrom. The Maelstrom proceeded to destroy the Venture Koi and fired lightning at the remaining explorers, successfully smashing Duke Exeter. Doctor Overbuild attempted to contain the Maelstrom, but as a result the Maelstrom shattered Planet Crux into countless smaller worlds.

The Maelstrom's menace led to the mission of the Pods to deliver the LEGO Universe's plea of help to the Blue Planet. However, while passing through the rift between the two universes, MMW4 was unrelentingly pursued by the Maelstrom's energies. The paths of Pods 6 and 7 were altered to avoid the dark menace, although JFR6 was disturbed by the possibility of the Maelstrom passing through the rip. The Maelstrom also appears to have corrupted AJR7 or altered his Mission Log.

The Maelstrom gained a foothold in Gnarled Forest after greedy Pirates attempted to stockpile Maelstrom Crystals, thinking that they were valuable treasure. The Maelstrom Trench contains so many of these Pirates' Maelstrom Treasure Chests that it has not only corrupted the planet chunk's inhabitants, but the Maelstrom is actually seeping into the land itself, as Renee Tombcrusher once noted.

In Forbidden Valley, the Maelstrom possesses Dark Ronin and has taken over the ancient temples and tombs of Cavalry Hill. Paradox studies the Maelstrom energies in the Paradox Refinery, but their Maelstrom experiments unintentionally unleashed Maelstrom Dragons which now preside in Maelstrom Valley.

Maelstrom concentrations are at their highest at Crux Prime, which is literally surrounded by a sea of Maelstrom energies. In such high concentration, rather than corrupting and infecting denizens into Stromlings, the Maelstrom can spawn infinite numbers of Stromling Invaders. However, following the completion of Nexus Tower, the Maelstrom's occupation of Crux Prime has significantly weakened, causing fewer Stromling Invaders to spawn.

The Darkitect's only known ally, Lord Garmadon, uses the Maelstrom to strengthen his Skulkin armies. The skeletons mine for Maelstrom Ore in the Maelstrom Quarry and fashion it into weapons and armor, which the Skulkins use in the siege on the Ninjago Monastery.

The Maelstrom energy takes on the form of a purple fog-like substance. These chaotic energies are used as the tools of destruction by many Maelstrom beings, from the Darkitect blasting players with Maelstrom energy to Stromling Admirals firing Maelstrom from their cannons. Paradox also utilizes the Maelstrom energy, and many abilities of the Space Marauder and Sorcerer specialty kits are Maelstrom-based.

The Maelstrom is most frequently depicted as a black hole or a massive vortex of chaotic and destructive energies. This black hole is capable of unleashing bolts of lightning-like energy. Usually, a pair of eyes most likely belonging to the Darkitect appear in the center of the Maelstrom vortex. As seen in the "Answer the Call" trailer, smaller vortexes can open and unleash Stromlings.

Maelstrom Goo is a substance apparently excreted from Maelstrom Spiders, as much of it can be found in the wake of the Spider Queen's path through the Avant Gardens battlefield. Wisp Lee can use ten samples of Maelstrom Goo to create a Maelstrom Cube, with which a pile of bricks can be animated into a Dark Spiderling.

Maelstrom Fog is a dangerous gaseous substance which Minifigures cannot endure. In Avant Gardens Survival and the Battle of Nimbus Station, Maelstrom Fog blocks the entrances and exits to the instance, trapping players and forcing them to fight the enemies. While the Spider Queen occupied the Maelstrom Mine, the inner caverns were filled with Maelstrom Fog that players could not pass. When the Spider Queen fled to Block Yard, Maelstrom Fog manifests over the Launch Area in the form of a giant storm cloud.

Early concepts for LEGO Universe focused on the city theme; ideas that evolved into Nexus City. According to concept artist Jerry Meyer, "City scenarios in which some sort of chaotic event would happen caused by some disruptive energy was the first line of thought", and the term Maelstrom didn't come along until later. Early concept art shows large squid-like creatures crash landing in Nexus City.

As development continued, the plan was for player property to be part of the main zones. The design team was concerned about zones starting out large and empty, so content designer Chris Floyd came up with the Maelstrom, originally envisioned as a wall that encircled the zones, which moved back to open up more property as more players entered a zone and worked together completing gameplay challenges. Chris then started trying to think of a big baddie for the game, and came up with the Prisoner (named the Darkitect in the final game), who was one with the Maelstrom and could pop out at any time or spawn Darklings to make life more difficult. The backstory was then created to fit these game mechanics.

At the time, Crux was a round planet, with an infinite well/font of plastic at the north pole (the Nexus), and a curtain of infinite Imagination at the south pole (the Nimbus). The explorers who found Crux were the founders of the factions, but not the present day leaders, and there were eight explorers instead of four. One of them, Maestro (Baron Typhonus in the final game), corrupted the Nimbus into the Maelstrom, and became the Prisoner.

Later, Crux's design shifted to that of a flat plane, which the Maelstrom formed underneath.[1] This later changed again to the exploded cubic planet idea seen in the final game.

For much of development, the Maelstrom's primary method of attacking was to launch Maelstrom Shards at them, an idea that presumably evolved from the squid attacks in early concept art. These would infect the area they crashed into upon landing, and spawn Darklings until smashed by players. The Vanguard Outpost was partially destroyed by one such Maelstrom shard, and the Robot Mowers of Nimbus Park were corrupted after a Maelstrom meteor crashed into the gardens. This method of attack from the Maelstrom was largely dropped in the released game, and while Maelstrom shards make an appearance in the Battle of Nimbus Station, they do not spawn Stromlings, and can simply be smashed by players for power-ups. However, an animatic for the Kingdoms World shows a similar concept may have been a story element in that world, had development continued.

Concept render of a squid attack released in early 2007

The Maelstrom on an unreleased map 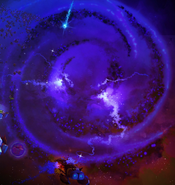 The Maelstrom on the LEGO Universe map screen

The Maelstrom as seen in Mission 11

The Maelstrom in a cinematic trailer

The Maelstrom in-game during beta testing

The Maelstrom in-game, as seen from the Venture Explorer 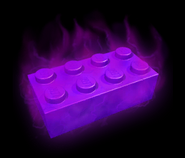 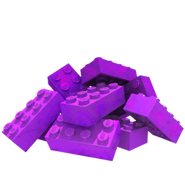 The Darkitect blasting a player with Maelstrom energies 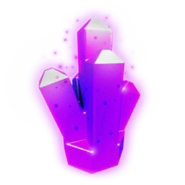 Nuckal's Maelstrom Crystal
Add a photo to this gallery

Retrieved from "https://legouniverse.fandom.com/wiki/Maelstrom?oldid=160453"
Community content is available under CC-BY-SA unless otherwise noted.