Maelstrom Generators are large generators seen on properties before/while claiming. They generate Stromlings, and continue to do so until smashed.

Once destroyed, they can be rebuilt into an elevator for 6 Imagination to take the player up and retrieve the trapped imagination, rendering the property claimable.

Maelstrom Generators have a health bar like enemies, instead of being smashed on one hit. This health ranges depending on the property. Generators on the Block Yard have 9 health, whereas generators on Avant Grove have around 27.

The concept of Maelstrom Shards evolved from even earlier ideas, before the concept of the Maelstrom had fully formed. According to concept artist Jerry Meyer, "City scenarios in which some sort of chaotic event would happen caused by some disruptive energy was the first line of thought", and the term Maelstrom and its backstory didn't come along until later. Early concept art/renders of Nexus City show large squid-like things crash landing in the city, which eventually evolved into the idea of Maelstrom Shards.

The Vanguard Outpost, the first truly playable world developed for LEGO Universe, featured a Maelstrom Shard that crashed through the castle's tower/walls and left a crater in the ground.

Early versions of Nimbus Park/Avant Gardens also involved Maelstrom Shards/Meteors, which had infected Robot Mowers and turned minifigures into Strombies. The player would have then reported the Maelstrom activity to the News Reporter in YouReeka/Zorillo Plaza.

Maelstrom Shards/Crystals also appeared in early versions of Forbidden Valley. In alpha testing, "Clean the Gardens" achievements could be found in the Forbidden Valley section of the Passport for smashing 25, 75, and 150 Maelstrom Crystals.

The results of a Maelstrom Shard crashing through the Vanguard Outpost 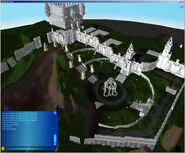 Concept art of Maelstrom Shards raining down on Gnarled Forest

An early model of a Maelstrom Shard, animated to rumble occasionally 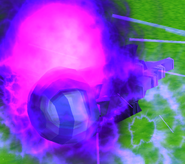 A Forbidden Valley Maelstrom Crystal, also seen in the Battle of Nimbus Station

A Maelstrom Generator on Chantey Shanty

A Maelstrom Generator on Avant Grove

A Maelstrom Generator, rebuilt into a platform

An orb of Imagination clearing the Maelstrom from a property

The objects Dark Spiderlings emerge from in the Spider Queen Battle
Add a photo to this gallery
Retrieved from "https://legouniverse.fandom.com/wiki/Maelstrom_Generator?oldid=160363"
Community content is available under CC-BY-SA unless otherwise noted.