This article is about the location in Avant Gardens. You may be looking for the unreleased Maelstrom Spider battle instance known as Spider Cave.

The Maelstrom Mine is a large cave within Avant Gardens with unusually high concentrations of pure Maelstrom. It is from here that Paradox pumped the pure Maelstrom that was used at the Paradox Research Facility before its untimely destruction. The main cavern is home to a Dark Spiderling, Stromling Mechs, and Stromlings. At the back of the cavern is the entrance to the Maelstrom Spider Queen's lair, which was previously blocked by a barrier of thick Maelstrom fog, which was remoed with the Power of the Nexus Force update. Melodie Foxtrot stands where the Maelstrom fog was formerly located and gives players daily missions to smash Spiderlings. Further into the cave there is a large area where Dark Spiderlings spawn and a launchpad that leads to the Spider Queen Battle Instance.

In the alpha test, Rad Eccles gave the Maelstrom Gas Mask as a reward for completing Crate Job!. However, players could not pass through the fog, and were instead shown the message "You need a maelstrom gas mask before you can enter this area", even with the mask equipped. This message was shown until July 2010 in the beta, when the message was changed to "This area is too infected! Better use a Maelstrom Helmet!".

A decapitated Stromling can be seen to one side of the mine. This Stromling was originally mostly brick built, but at some time in the beta was altered to more closely match the normal Stromlings.

A player in the alpha with a Maelstrom Helmet

The entrance to the Spider Cave in alpha 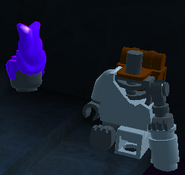 The smashed Stromling in the alpha and early beta 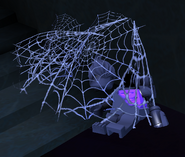 The Safe Spot With Melodie Foxtrot

The Paradox Maelstrom Mine

The Nexus Force Plaque at the Maelstrom Mine
Add a photo to this gallery
Retrieved from "https://legouniverse.fandom.com/wiki/Maelstrom_Mine?oldid=156061"
Community content is available under CC-BY-SA unless otherwise noted.