Maelstrom Valley is a region of fire and cliffs located in Forbidden Valley.

In Maelstrom Valley, small slabs of floating rock bridged by high winds lead to the Dragon's Den. There, Burnshot, Torchblight, Blastbreath, and an unnamed Maelstrom Dragon made their home and keep their treasure hordes, which include bricks of disassembled Ravencloud Guardians. Burnshout, Torchblight, and Blastbreath's homes are marked by three Dragon Gongs which can only be smashed by Maelstrom Hammers.

Maelstrom Valley's entrance is guarded by Dark Ronin and Maelstrom Horsemen. The gate features a Nexus Force Plaque, which details the history of Maelstrom Valley, and a Fortress Dragon Statue, interacting with which brings players to the Forbidden Valley Dragon Battle. 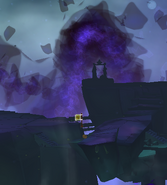 A Flag in Maelstrom Valley during beta testing

A Treasure Chest in Maelstrom Valley during beta testing

The Nexus Force Plaque at Maelstrom Valley
Add a photo to this gallery
Retrieved from "https://legouniverse.fandom.com/wiki/Maelstrom_Valley?oldid=148411"
Community content is available under CC-BY-SA unless otherwise noted.