Mardolf the Orange, also known as Mardolf the Inventor, is an Assembly Wizard found in Brick Annex just outside Assembly HQ.

Believing that great builders use imaginative color schemes, Mardolf the Orange started a contest to challenge the builders of the LEGO Universe with the task of vibrantly recoloring Models on their Properties.[2]

In alpha testing, Mardolf the Orange wore a blue Wizard Hat, had a Castle Dwarf-style beard, and carried a Tiki Staff.

In alpha testing and early beta testing, Mardolf the Orange rewarded players with the Assembly Stamp in a very different mission chain. He sent players to prove themselves by earning a Level 2 Thinking Hat, which could be received by building a Duck at the Duck Shooting Gallery Showcase for the Duck Showcase Operator. Only once players returned with a Level 2 Thinking Hat would Mardolf the Orange reward them with the Assembly Stamp. When Showcases and, shortly afterward, the Duck Shooting Gallery were cut from LEGO Universe, this mission chain was dropped. 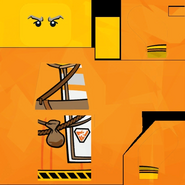 Mardolf's textures
Add a photo to this gallery
Retrieved from "https://legouniverse.fandom.com/wiki/Mardolf_the_Orange?oldid=156146"
Community content is available under CC-BY-SA unless otherwise noted.